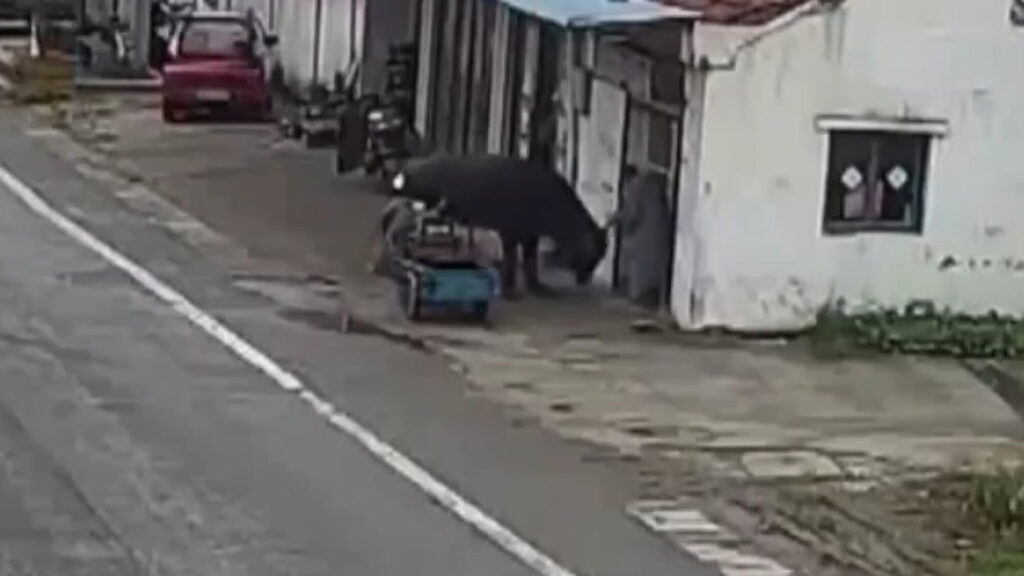 NANTONG CITY, China — — An escaped bull attacked an elderly man in China, who tried to beat it away with a broom before police killed it.

The incident took place Dec. 3 on the streets of Nantong City, located on the bank of the Yangtze River in the east-central province of Jiangsu.

Footage of the life-threatening incident shows a large black bull running across a road toward a house where an elderly man is seated.

The bull charges at the pensioner and bashes him against the doorway. As the man falls inside the house, the bull continues the assault.

The quickest way to end such attacks is by shooting the bull in the head, but initially, the animal was too close to the victim, reported Officer Chen Shuangshuang, who was called to the scene and has killed several bulls during his career.

Shuangshuang was able to shoot the animal twice in the heart. The beast keeled over and police attended to the injured man. However, the bull managed to stand up moments later, and it took two more shots to kill it.

Police said the incident occurred at a critical time of day, as a nearby school was about to dismiss its students.

It is unclear where the bull came from, and police are still investigating the incident.

Bulls are known to cause more livestock-related deaths and injuries to people throughout recorded history than any other domesticated animal.

Sometimes, people put themselves in the path of such animals on purpose. That includes the running of the bulls in Pamplona, Spain, an event that gained worldwide fame thanks to its inclusion in Ernest Hemingway’s 1926 novel, “The Sun Also Rises.”

(Edited by Fern Siegel and Matthew B Hall)

@eagle4congress @RexChapman 4Chan, Gab, 8Chan, Paler, Telegram, the dark web, pulled out of their virtual shadows and in the flesh and blood present IRL.

@CDC this is a disease that should be tracked accordingly.
View on Twitter
0
0

@jonah_mcgarva @Paratus2014 @jasperlionel @AgentsZar @NIH @FDA @cdc Btw >.What did that professor in Australia state Months ago... Trial Ivermectin with TWO OTHER DRUGS... IE: 3 Drugs as a Combination in an attempt for a solution>NOT Ivermectin ALONE! Go Figure!

Yet you have DANGEROUS EVIL persons claiming Ivermectin is approved in Australia!
View on Twitter
0
1

In reply toGodfrey of Bouillon